1. The Newspaper Lady who became a TV/film sensation The lady in this newspaper article became viral and her picture went on to feature in numerous films and commercials. Bobak Ferdowsi became quite a sensation during the August 6, 2012 landing of the Curiosity rover on Mars; as he wore an unusual mohawk style, seen on NASA TV’s live broadcast of the event. The stylish Flight Director’s hairstyle was also acknowledged by President Obama.

3. The Mysterious Lady In Red at the London Olympics She kicked up quite a storm when she mysteriously appeared in ‘red and blue’ at the London Olympics, besides Sushil Kumar (flag bearer for the event). Indian officials and media collectively fumed at the fact that she insulted India on a global forum by “gate-crashing” it; while later it was confirmed that her name is Madhura K. Nagendra and she was part of the dance cast for the opening ceremony. Meet Karl Power. He’s the envy of every sports ‘streaker’, albeit he has taken streaking to an altogether new level. Appeared in a photograph with Manchester United, before their Champions League game against Bayern Munich, in 2001. This is surely one of the craziest ways in this list. Lena Soderberg’s 1972 Playboy photo became one of the most widely used standard test images for compression algorithms. This image had the right balance of colour, detail, focus, shading and reflections, which made it the perfect fit for algorithms. This image is another popular meme face and it belongs to Blake Boston aka Weezy B. This picture was posted on Reddit and received 8,607 upvotes, prior to being archived. Blake revealed that this picture, that later became famous, was clicked by his mother.

7. The woman who started the Civil Rights Movement in America 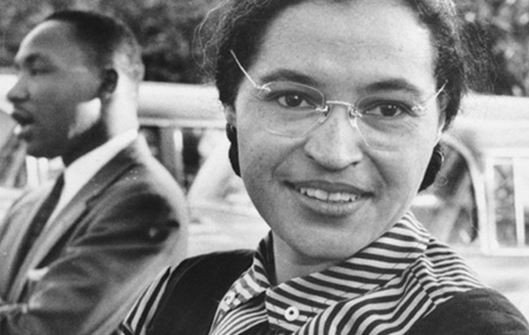 Rosa Parks was arrested for refusing to give up her bus seat to a white man, on the afternoon of December 1, 1955. The seemingly insignificant decision of hers sparked the Civil Rights Movement in America.

8. The man who was too handsome for Saudi Arabia In 2013, Omar Borkan Al Gala, an actor/photographer/poet from Dubai, along with two other men were thrown out of Riyadh’s annual Janadriyah Festival by Religious Police for being ‘ridiculously handsome’. It was later found out that that wasn’t the reason why Al Gala was chucked out. He was booked for dancing inappropriately at a wedding. This unknown protester openly defied the Chinese Military by standing in front of the Chinese tanks, as they tried to progress as part of the government’s crackdown on the Tianamen Square protests on 5th June, 1989. The picture below is one of the most iconic images of the 20th century. Laina Walker became popular in the craziest ways when she was given the “Overly Attached Girlfriend” meme-face, which she carried with grace and elan. Ashley Kerekes, an American woman, became a Twitter sensation for her handle name: “The Ashes”, which is the famous cricket series between England and Australia. She got a lot of people following her overnight and was bombarded by tweets and cricket-related messages, to the extent that she started following the sport! You might remember this kid from seeing all the ‘success’ related memes on the Internet. Well, here comes Sammy Griner, a boy whose mother took this picture of his when he was just 11 months old, in 2007 and posted it on Flickr. Nothing happened for two years, until one day the photo went ‘crazy viral’. The “I hate sandcastles” picture became a stock photo and had big brands like Virgin Mobile, vying for it.

Here Are What The Salaries Of Some Of The World’s Greatest...