SpaceX on 6th Feb 2018 launched Falcon Heavy, the most powerful operational rocket in the world, for the first time. The payload on top was a red Tesla Roadster owned by company founder Elon Musk. His electric car is now in space, helmed by a spacesuit-clad dummy named “Starman” in the driver’s seat.

The Falcon Heavy launch far from universally appreciated, though. Critics ridiculed Musk and SpaceX for the payload, which Musk previously said would be “the silliest thing we can imagine,” as a wasted opportunity to send something scientific, educational, or otherwise practically useful into space. 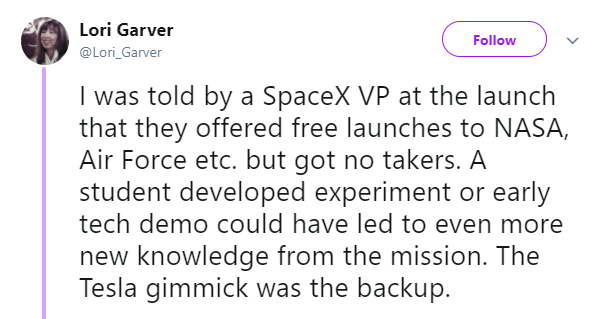 However, according to Lori Garver, a former NASA deputy administrator, the company offered the US government a chance to fly whatever payload it wanted – free of charge – before deciding on Musk’s car. “I was told by a SpaceX VP at the launch that they offered free launches to NASA, Air Force etc. but got no takers. A student developed experiment or early tech demo could have led to even more new knowledge from the mission,” Garver tweeted on Thursday evening. “The Tesla gimmick was the backup.”

Why SpaceX’s big golden ticket was turned down? The last photo of “Starman” in Elon Musk’s red Tesla Roadster as it flies toward Mars orbit. Earth is the bright crescent seen in the background.

Falcon Heavy can “lift into orbit nearly 64 metric tons (141,000 lb) – a mass greater than a 737 jetliner loaded with passengers, crew, luggage, and fuel,” according to SpaceX. But there may be a few reasons why government officials essentially turned down a $90 million ticket to space aboard the rocket.

First, NASA, USAF, and other government agencies have very low thresholds for risk, since they don’t want a fiery explosion to cause them to lose potentially billion-dollar taxpayer investments. And an explosion is precisely what Musk had said could happen for the better part of a year leading up to the launch.

Garver later suggested that the offer may have come too late or too casually to be taken seriously by NASA, USAF, and other divisions that SpaceX may have contacted. Indeed, it can take several years and millions of dollars to build and test even a small satellite that can function in the harsh environment of space.

Also read: Facts We Were Taught In School That Turned Out To Be Complete Lies

“I have no idea when Elon decided on the car & the opportunity offered to the govt could have been for smaller payloads, low cost v. free etc.,” Garver later tweeted. “I’m sure [SpaceX] would call the car idea brilliant & provocative.” She continued: “If only informal inquiries were made & there was no serious interest, that is understandable,” adding that this is especially true for a first-time vehicle, and with a late inquiry. “Tesla had to have been planned for awhile.”

A USAF Space Command representative could not confirm whether an offer was made, but said that if it was, it was likely not a matter of record.

“To my knowledge, we never got any official offer. I don’t know if it was an informal conversation or something like that. I’m looking into it,” Graver told.

Quirky Secret Facts About Everyday Things You Didn’t Knew About